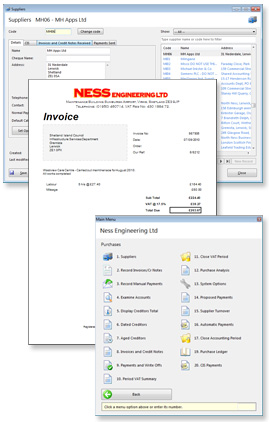 Ness Engineering wasn't convinced by off-the-shelve accounts packages, instead opting to stay with a reliable tried and tested DOS system now reaching 20 years old. This system was simple to use and productive allowing them to handle everything relating to purchases and sales efficiently, and meet the demands of a large and busy business. Features included producing invoices with calculated mark-up, credit notes, statements, handling payments and producing monthly cheques, recording staff labour and materials against jobs tied with purchases, maintaining ledgers, and producing a variety of accountant friendly reports and statistics.

Unfortunately this DOS system showed signs of aging, was limited to printing on a dot matrix printer, and only allowed single user access. There were a number of enhancements and features on the wish list, such as producing monthly statements for the Construction Industry Tax scheme (CIS), which was a timely exercise. So the task was to develop a new Windows based system based heavily on the original, maintaining the same efficiency and familiarity, but with added enhancements taking advantage of features in Windows.

A Windows application was developed importing all 20 years worth of data and adding a new Windows interface, as well as adding a number of features including CIS. The new system allowed the same familiar way of accessing areas through key-strokes, but with enhancements such as improved record navigation, logical grouping of information in areas for increased visibility, and recording more information so archived paper records didn't need to be sought. Print-outs such as invoices and statements are now branded in full colour and laser printed, and cheques are now printed without sheet feed issues of old. The system is multi-user and multiple areas can be opened and worked on at once. All print-outs and lists can also be saved in Microsoft Excel or Adobe PDF format for added flexibility.

As part of electrical regulations, a variety of SELECT® approved forms and certificates need to be produced for customers detailing such things as the installation, test results, distribution and circuit boards, observations and recommendations, with signed declaration. However this paperwork can often take much longer than the job itself, with some longer forms taking 4-5 hours to complete. Handwriting issues and different interpretations of questions by electricians add further problems.

It was decided a portable software system would be the best solution allowing forms to be input and printed easily, since each electrician already carried a laptop and printer. This would produce a professional end-result with clearly typed answers. The form input carried out by the electrician onsite would synchronise with a master system when the laptop was back in the office, keeping everyone up-to-date. This system was built with features including:

This system is currently being rolled out to the 30+ electricians in the company.